The CA1201 has a flexible power scheme with seamless and automatic power on/off based on the input signal, which reduces consumption when a signal is not present. With virtually zero configuration required, an energy smart and hassle-free amplifier system can easily be set up for hands-off operation. If the CA1201 is powered on but does not receive an input signal for 20 minutes, the system automatically enters sleep mode to reduce power consumption. As soon as the Auto Ramp circuit detects a signal, the system powers on and normal operation resumes. The amplifier can also be instantly forced into standby mode or awakened via the front panel power button. 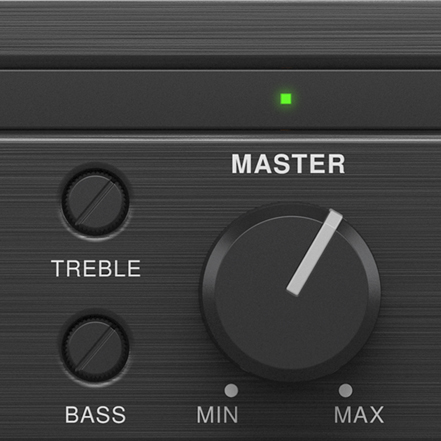 CA1201’s controls are sublimely intuitive, allowing the operator to quickly make adjustments. The front panel power button and Master volume knob are easily accessible, enabling virtually anyone to operate the system. Bass and Treble controls are also available for fine tuning – but require a tool when making changes.

Easy to Hook Up

For connecting a balanced source such as a mixer or audio processor, a standard 3-pin Euroblock Input socket is provided. Alternatively, RCA cables can be connected for unbalanced stereo sources (summed to mono), such as players, phones or computers, however only one input source should be used at a time. Loudspeaker Output is provided in the form of a standard 2-pin Euroblock socket.