Our goal for M32R LIVE was to combine the best of classic British console designs with advanced modern technology to completely redefine what a rack mountable digital desktop mixing console can offer.

We began the industrial design process by drawing inspiration from a somewhat unexpected source – the luxury and high-performance car industry.

Simply because the design teams at Aston Martin*, Bentley*, Rolls Royce*, and other leading manufacturers are skilled at introducing innovative technological advancements while simultaneously maintaining the feel, essence, and intangible qualities of their cherished brands. And in essence, that’s the challenge we too faced when creating the M32R LIVE console.

So in order to create a future-forward design that took the Midas legacy even further, we enlisted the help of Rajesh Kutty, a leading industrial designer known for his work with celebrated luxury auto manufacturers such as Bentley, etc.Kutty started by examining the design elements that have made Midas consoles so highly sought after – from the straightforward, logical layout to the unparalleled usability and ergonomics. These are characteristics that live sound engineers around the world have come to rely on, and are key aspects of the Midas legacy.With these design elements in mind, Kutty set forth to create a styling that would be modern, innovative, futuristic, and stunningly elegant.Many different construction materials were tested. Countless design variations were explored. And in the end, a styling was chosen that represented the perfect marriage between aerodynamic artistry and uncompromising performance. The design is both ultramodern and distinctly classic at the same time.

The Landmark in Console History

A close look at M32R LIVE reveals that the styling is completely new in every sense of the word. Rajesh Kutty’s automotive-inspired design elements mesh perfectly with a recognisable Midas signature, setting the M32R LIVE apart from any other console. Its beautifully streamlined and elegant form factor completely revolutionises the experience of live mixing.

The Midas M32R LIVE construction is equally impressive, and is designed to offer you years of reliable performance while withstanding the demanding environment of live performance venues. M32R LIVE employs a predominantly space-frame construction, with parts of the sub-frame consisting of high-performance aluminium. Multiple alloys have been employed throughout to guarantee maximum component efficiency and an improved performance-to-weight ratio.The M32R LIVE is an innovative, evolved design that brings together modern construction principles and high-tech materials into a styling destined to go down as a landmark in console history.

Midas is the Epitome of Excellence

In 2013, Midas approached me to create a new design language for Midas and with it a new mixing console. Having designed for Bentley, I am intimately familiar with the challenge of transforming a brand while retaining the precious heritage – in this case the 40 year old iconic British mixing console brand Midas.

Representing the pinnacle of its industry, Midas is the Epitome of Excellence. When it comes to ergonomics, performance and style, the aspects of a high-performance luxury car equally apply to a high-end mixing console. I was given a blank sheet of paper for my choice of materials. This meant considering lightweight materials such as top-grade aluminium, while using a sophisticated steel construction, for high-impact structural areas.High attention was paid to the tactile elements such as fader knobs and the illumination to work under all background conditions.From the onset the idea was to break the mould! Hence the form study deliberately tried to break away from the static, bulky feel of today’s mixing consoles. Instead making it more dynamic, ergonomic, yet luxurious. Colours, size, mobility and hardware were given equal importance to arrive at the M32R LIVE – a true projection of the brand, today.Rajesh Kutty

The Midas M32R LIVE is a future-forward console that completely raises the bar for live mixing. 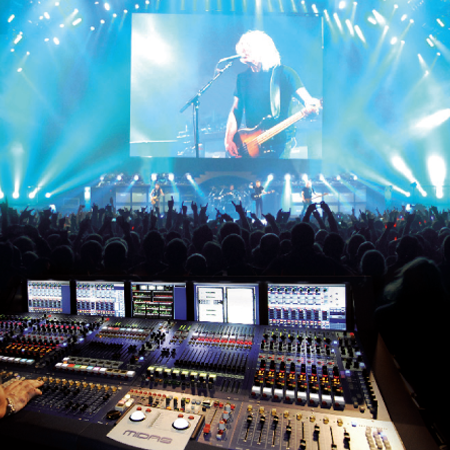 While the Midas M32R LIVE design, styling, and construction will surely turn a lot of heads, it’s the sound that matters most to engineers and performing artists. And that’s where M32R LIVE shines even brighter – as the latest in a long line of pristine-sounding Midas consoles, it descends from a celebrated lineage that literally set the standard in electrical design and sound quality. Ever since Midas consoles first found fame 40 years ago with acts like Billy Joel, Yes, The Beach Boys, Pink Floyd and others, the Midas legacy has always been about uncompromising quality and the ultimate in sound reproduction.